4 years ago Mr Goodwin, a Pt England teacher had won a trip to Samoa because he had won a race, yes a race in running.

He was Exuberant and had always wanted to go to Samoa.

He was so excited that he said “I am so happy that I’m going to do something I have never done before and post it on Tiktok”.

Yes he posted the ticket to Samoa on Tiktok which was strange but nobody minded but little did he know something bad was going to happen on his trip.

Now fast forward from all the packing Also, did I tell you he was in a sour mood No? well he was in a very sour mood because there was one problem: he had lost his ticket out of all the things to happen he had to lose that ticket what a waste of time.

Bursting for joy he happily went on his way to Samoa and lived happily ever… wait no he had experienced a big humongous earthquake he also posted that on tiktok wow The End. 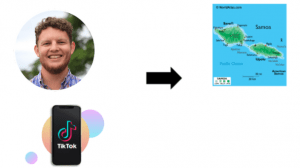