Once upon a time there was a man type figure as dark as night who wore black robes and a black hood who suddenly had just emerged from a white beam located in an old decaying house that looked like it was as old as time.

He had white teeth but not a mouth or a face, just a skull with glowing red eyes.

There was a dark eerie hall that looked like it had never been touched in centuries because of how dusty and dead it looked.

Speaking of night it was midnight where the moon was BLACK wait it was a solar eclipse the Sun was behind the moon’s shadow.

Behind this so-called man was a humongous scythe that was not rusty nor polished, it was old and I believe that “thing” with a scythe is Death aka The Grim Reaper.

With all his might he struck the ground with his scythe and the houses all fell into different colours like Light and dark as if they were being sorted into the good place and the bad place. To be Continued. 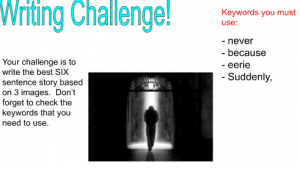