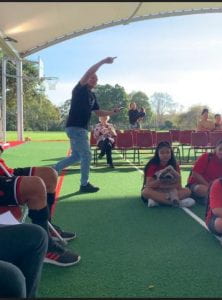 On the first day of Term 2 at Assembly we found out that our Deputy Principal Mrs Nua had returned. But there was a problem, Mr Jacobsen, Mr Burt and Mrs Sorenson weren’t there on the stage. Mrs Nua Called Mr Burt first but was greeted by Mrs McMillian telling us that Mr Burt was busy and wasn’t Available. The next person that Mrs Nua called was Mr Jacobson who had got lost at the bike tracks so we lead him to Tamaki College on Accident then  we lead him back to Pt England. Miss Sorenson got lost on  the field and Mr Burt got lost in the staff room.